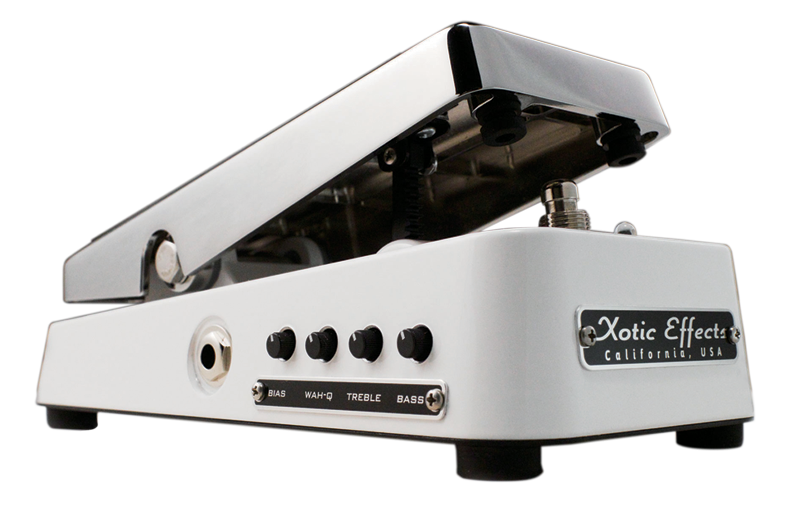 Xotic Wah is modeled based on the Holy Grail wah, 1967-1968 Italian-built Clyde McCoy Wahs. With the Xotic Wah you don’t get one or three sounds in one pedal, you get unlimited sounds with unique controls that shape and contour your sound the way you hear it! The adjustability and flexibility of the Xotic Wah makes this one of the most versatile wah pedals available today!

External Controls BIAS CONTROL — Changing the bias warmer will lead the Xotic Wah to having slightly more output & firm up bass frequencies along with a more pronounced wah through the sweep. A cold bias is common with vintage wah pedals for a very clear voice that is more transparent in tone and smoother in operation.

WAH Q CONTROL — This knob adjusts the Q (the width of the filter peak) and in basic terms, adjusts the amount of the wah effect for precise filter shaping to achieve vocal-like effects.

ADJUSTABLE RUBBER STOPPER — Located on the backside bottom of the treadle this rubber bumper can be shimmed to adjust the travel range of the pedal.

LED INDICATOR — The LED indicator is located at the top of the Xotic Wah and lights up when the pedal is on. One unique feature of the Xotic Wah is the LED will flash if the battery power falls below 50% and indicates that it is time to change the battery.

DC JACK — 2.1mm x 5.5mm 9VDC — Negative Center. When an external power supply is used, the battery is disconnected from the circuit. When using a battery, the life of the battery can be extended if you unplug the input when the effect is not in use for long periods of time. Battery access is through the removal of bottom plate (4 screws).